Aya Hirano
Kaoru Akashi (明石 薫, Akashi Kaoru) is one of the main heroines of the series Zettai Karen Children. She is the daughter of Akie Akashi, the younger sister of Yoshimi Akashi and a Level 7 Psychokinetic Esper who is also the spiritual leader of the group The Children.

A dark prediction exists regarding the Future of Kaoru, otherwise known as Queen of Catastrophe, where she becomes the leader of Esper organization P.A.N.D.R.A. and commits numerous atrocities involving many deaths that become part of a devastating war between Espers and normals. Only to embrace her death at the hands of her former protector, Kōichi Minamoto.

During her elementary school years, as a B.A.B.E.L. Esper she would keep her hair short and wear a Japanese schoolgirl-style uniform consisting of a blue double-breasted blazer, a large red bow, a white miniskirt and sneakers. In casual dress, Kaoru changes outfit by the story, but often wears short skirts or otherwise shows as much skin as she can.

During middle school she favoured longer hair. Her uniform changed to a blue coat with sailor-style collar, emblazoned with the B.A.B.E.L. logo on her left arm and her team name and number on the right, over a white shirt and red tie, and a white skirt. In casual dress, she opts for less revealing clothing.

During high school her uniform changed to a short jacket with a notch lapel over with double-breasted shirt, a miniskirt, and a waist-length cloak.

In the prediction of the future, the adult Kaoru has short hair and wears a long red jacket over a white sleeveless low v-neck crop top, and a short black skirt ripped at the sides.

Kaoru gets excited whenever given a mission, she is quick to accomplish the task at hand but gets carried away most of the time. She has a very energetic personality, sometimes in a good spirit and sometimes not. Perhaps the least intelligent of "The Children" as she tends to follow through with her heart in the thick of a situation rather than resort methods of cunning. She has a short temper, even with the people she holds dear, such as Minamoto. The only people she is shown not to abuse are her immediate family members, whom are all scared of her abilities and end up neglecting her a lot, perhaps on purpose. She likes reading "old geezer" magazines and drinking energy drinks. She does not think of her position and most of the time forgetting it. An example of this is when she is to save a pilot, she successfully saved the pilot from harm but forgot about the plane that caused the crash in a building. She acts like a pervert towards women, sexually harasses her teammates and her classmates as well and shows interest in female figures in general. This is most likely due to doting on her mother and sister, both of whom are very attractive.

When Kaoru was a child, about 4 or 5 years old, she was not allowed to go to a regular school. Akie Akashi and Yoshimi Akashi neglected Kaoru at a young age to focus on their careers. Before, she had even used telekinesis against her mother, sending her to the hospital. Because of these incidents, she and those around her were deeply impacted.

She hated her powers and she want her powers to disappear. She was questioning herself constantly, wondering, "Why did I have this power?","Why am I alive". After testing the ECM Prototype on her, Chief Taizō Kiritsubo showed her the video of two other kids that had the same level as her and she was amazed. Before Aoi Nogami and Shiho Sannomiya met Kaoru, there were some problems between the two. They hated their powers and were afraid of harming other people.

Kaoru had used telekinesis to pull Aoi and Shiho into a close hug and declared the three of them friends/comrades, much to Shiho's disgust. After accidentally reading her mind, Shiho asks her what happened to her mother. Kaoru, thinking that Shiho was afraid of her, hugged her tightly and cried out, "Please don't be afraid!" Shiho reluctantly hugged her back to comfort her. Later on during the night, Shiho and Aoi also make up. They are all placed in the B.A.B.E.L. team "The Children" and they start a powerful friendship that would last into the future.

During a mission, she and the others were sent to capture a teleporter. After they had captured him, she undergoes an examination of the development of her psychic ability. Upon learning that the teleporter escaped, she and the team head out to capture him again. During this, she is tempted by the criminal teleporter with promises of money, but is deterred by Minamoto's words.

Kaoru and her team are given a mission to rescue civilians trapped in a tunnel whose entrance has collapsed. She and the others refuse to help, saying that it is not their problem, but change their minds after being insulted, told that they have tiny chests. During the rescue, Aoi becomes unable to teleport, so to rescue a pregnant woman and her unborn Esper baby, Kaoru controls a helicopter from within the tunnel and fires a missile to open a path.

During a test to prove they can integrate into a normal school, Kaoru explodes the head of a robot classmate that is being hateful toward Espers. She is unconcerned by the resulting scolding. Later when all of the robots are taken over by a terrorist organization and are spewing hate speech about Espers, Kaoru is unable to control her anger and is held back by Minamoto.

While playing at a beach on an uncharted island along with Aoi and Shiho, she encounters the dolphin I-009. Kaoru is disappointed to find out the dolphin is a B.A.B.E.L. aligned Esper because she wouldn't be alowed to eat him. When I-009 tells them of its soon predicted death, Kaoru promises to protect him. Later when Kaoru is asleep, I-009 shows Minamoto the prediction of the future where Kaoru become the Queen of Catastrophe. Later that night Kaoru fights to protect I-009 from some terrorists but is devasted when I-009 sacrifices himself to protect Chief Kiritsubo.

Kaoru appears in several episodes now as a middle school student. In episode 6 she appears and faces Hyoubu to prevent him from reaching the ship. In the beginning she had the upper hand as Hyoubu doesn't appear to be taking her too seriously until Hyoubu turned off his limiter and defeated her.

By the end of part 1, Kaoru accepts becoming P.A.N.D.R.A.'s temporary leader as well as her title of Queen of Catastrophe. Alongside Shiho and Aoi, she sends a viral video denouncing P.A.N.D.R.A.'s original methods and indirectly declares war on the darkness separating Espers and Normals (aka Gilliam) with the goal of bringing them back together in harmony, staying true to Minamoto's teachings and ideals.

Kaoru is psychokinetic, meaning she can move things with her mind. She is one of the most powerful psychokinetics in the series, possibly second only to Hyoubu Kyousuke. Even when her powers are suppressed by her Limiter she is shown to be able to push people with enough force to leave a surface crushed. She usually comes up with weird names and calls them all psychic something out of habit, which sometimes causes her to be unable to do anything, as she is pondering on what to call her next movement.

Kaoru is shown multiple times using wind or her own body to damage other by applying force to either. Her power is so precise that she is once shown being able to control the reaction of oxygen to make things catch fire.

Like how Kaoru can apply force and direction to something, she can also put it at a complete stop, allowing her to completely take control of an object. With her limiter removed, she is shown being able to stop a boulder from crushing her and her friends even though the boulder itself was bigger than Kaoru by several hundredfold.

Kaoru can negate the vectors of gravity both around herself and those she chooses. Combined with how she can control directional force, this allows Kaoru to fly, as well as carrying others with her.

Like the other Children, Kaoru has a custom-made limiter given to her by Minamoto. Hers is a bracelet accessory. As all limiters, it can only decrease her power rank by 3 levels, meaning when activated, Kaoru has the power of a level 4. Once deactivated by Minamoto, Kaoru can use her full power as a level 7 esper.

This article is a stub. You can help Zettai Karen Children Wiki by expanding it.

Kaoru is an initial character. Like all characters in the game, she can only use three Special Moves and one Super Special Move at a time. 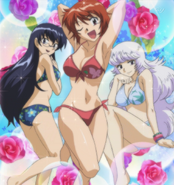 Retrieved from "https://zettaikarenchildren.fandom.com/wiki/Kaoru_Akashi?oldid=9983"
Community content is available under CC-BY-SA unless otherwise noted.